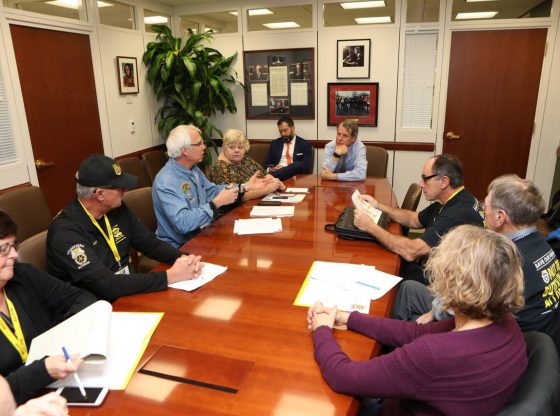 News |
WASHINGTON, Nov. 14, 2018 /PRNewswire/ — More than 150 Teamster workers and retirees headed to Capitol Hill today to urge their members of Congress to support pension reform changes that would protect the retirements of some 1.5 million Americans that are currently jeopardized. The bipartisan House-Senate Joint Select Committee on Solvency of Multiemployer Pension Plans was created earlier this year and ordered to work on a fix to the looming pension crisis. It has until Nov. 30 to come up with a solution that can then be forwarded to the rest of Congress for consideration. “It’s time for lawmakers to get back to work and ensure that hardworking Americans who played by the rules all their lives and paid into their retirements get the pensions they were promised,” Teamsters General President Jim Hoffa said. “There is no more time for delay!” Workers and retirees are rightfully concerned about their future. Many worked for decades and contributed to their pensions under the understanding they would be supported in their golden years. That is now being called into question, and it’s not right. “I’m too old to go and get a full-time job,” said Gary Dretske, a retired Teamsters Local 200 member who drove for USF Holland. “I’m living on a budget. You take some of that away and it’s going to be hard to live.” As it stands, there are more than 300 multiemployer plans across the country — including the Teamsters’ Central States Pension Fund — that are in danger of failing. The Teamsters are fighting for a legislative solution and working with lawmakers on both sides of the aisle. The union supports the passage of the Butch Lewis Act of 2017, which was introduced in Congress in November 2017 by Sen. Sherrod Brown of Ohio and Rep. Richard Neal of Massachusetts and has received bipartisan support. Founded in 1903, the International Brotherhood of Teamsters represents 1.4 million hardworking men and women throughout the United States, Canada and Puerto Rico. Visit www.teamster.org for more information. Follow us on Twitter @Teamsters and “like” us on Facebook at www.facebook.com/teamsters. SOURCE International Brotherhood of Teamsters
Local 916 Protege Program Announces New Partnership
Tell Congress It’s Time to Protect Our Pensions!