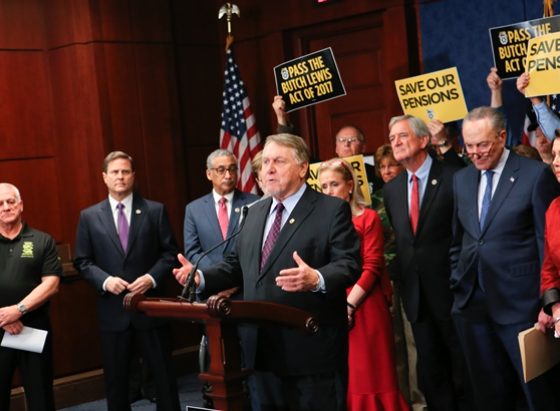 Featured,Politics |
From a press release issued by the IBT on September 26, 2018 The Teamsters are currently getting the word out about how the Butch Lewis Act (BLA) will save the pensions of millions of workers around the country. International Vice President John Murphy has spent much of this year flying to meetings across the country talking to Teamster retirees, members and leaders about the importance of lobbying members of Congress to support BLA. Besides providing details about what the bill would do, he also gives background about the process. But most importantly, he explains how doing nothing would devastate workers. “This is not a union issue. This is not a collective bargaining matter,” Murphy told Teamster leaders at Joint Council 53’s annual meeting earlier this month. “We are talking about the lives of millions of people who would be affected if Congress doesn’t take action to save the pension funds that need their help.” As it stands, there are more than 300 multiemployer plans across the country — including the Teamsters’ Central States Pension Fund — that are in danger of failing. The Joint Select Committee on Solvency of Multiemployer Pension Plans, co-chaired by pension reform advocate Sen. Sherrod Brown (D-Ohio), needs to find a vehicle that will deliver for these hardworking Americans who are paying, or have paid, into the pension pool and have played by the rules all their lives. The Teamsters strongly support the BLA, sponsored by Sen. Brown and Rep. Richard Neal (D-Mass.), as that legislative solution. The measure would boost financially-troubled multiemployer pensions so they don’t fail. It would create an agency, the Pension Rehabilitation Administration, under the Treasury Department that would sell bonds in the open market to large investors such as financial firms. Opponents of the bill have attempted to poke holes in it by saying it would cost too much. Murphy noted some had estimated the 10-year cost would be upwards of $100 billion. However, the Congressional Budget Office earlier this month put the decade-long cost at $34 billion instead. The Teamsters evaluation of the bill places the cost at $30.1 billion. While that might seem a lot, the cost would be far less than if the Pension Benefit Guaranty Corporation (PBGC), which serves as a backstop for pensions if they go bust, needed to pay out to retirees. In that case, Murphy stated, PBGC would have to pay $58.3 billion over 10 years. It would also result in $7.9 billion in lost federal tax review, as well as $137 billion in lost economic activity to cities and towns during the same time. And if the PBGC were to go bankrupt, as many believe it would if multiple pensions failed? Murphy said the costs to taxpayers would be far, far worse. “What’s incalculable is the increased demand on the social services safety net,” he said. “They will have to go somewhere for utility subsidies, maybe food stamps, and maybe more demands on Medicaid for their dependents.” The joint pension panel has until Nov. 30 to report a proposal out of committee. Murphy said the time for action is now. “The Teamsters know the Butch Lewis Act is the most reasonable way to preserve the benefits and the promises made to retirees and members,” he said.
Local 916 Welcomes the Members of Former Local 279
Get Out The Vote