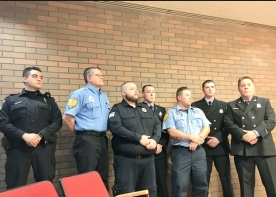 Among the first responders honored this week by the City of Decatur were Local 916 members, and Decatur Ambulance employees, Geoff Duncan & Jason Szymkowiak. Geoff and Jason, along with seven other first responders, helped to rescue an 8-year old girl from an SUV submerged in Lake Decatur last month.

The wreck occurred near the intersection of Country Club Road and Cantrell Street, when the vehicle left the roadway, overturned and became submerged in the lake. An 11-year-old girl was able to get out of the vehicle on her own but the first responders had to rescue the younger girl and the 21-year-old driver, who later died.

“Had it not been for the effort of these folks here, we probably would have lost the other two,” said Moore Wolfe. “We present them with the medals and offer them our thanks for their heroic efforts.”

“It was a team effort and everybody did a great job,” said Abbott. “It makes you proud to be a part of these organizations.”

Teamsters Local Union 916 is made up of over 4,000 hard-working men and women throughout the state of Illinois.