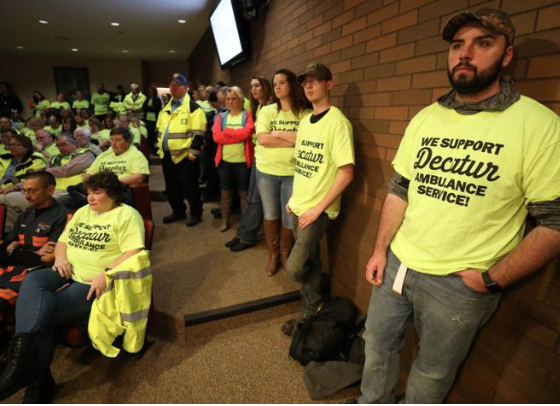 News |
Leaders of Champaign-based Arrow Ambulance say they’re going to regroup and assess what action they can take after the Decatur City Council on Monday fell one vote short of allowing the company to become the city’s second licensed ambulance provider.
The decision was contrary to the recommendation of an independent public hearing officer, who said in a report that the city had a “reasonable need” for another service beyond its longtime sole provider, Decatur Ambulance Service.
Teamsters Local 916 Business Agent Jerrime Hiser led efforts to mobilize Teamster members in advocating against the proposal. “We will not sit back while the City Council votes to include a company to move in to the community and compete against good paying union jobs” said Hiser. “This was a combined effort of unions and business leaders in the community standing up for working people and refusing to allow unfair competition against our members who have served the community with distinct honor for decades”, said Local 916 President Tony Barr. While the fight may not be over, Teamsters Local 916 will continue to stand strong. Parts of this article appeared in the Decatur Daily Herald & Review on November 20, 2018. Teamsters Local 916 represents over 4,000 hardworking men and women throughout Illinois in both the public and private sector.
Tell Congress It’s Time to Protect Our Pensions!
Local 916 Members Honored in Decatur