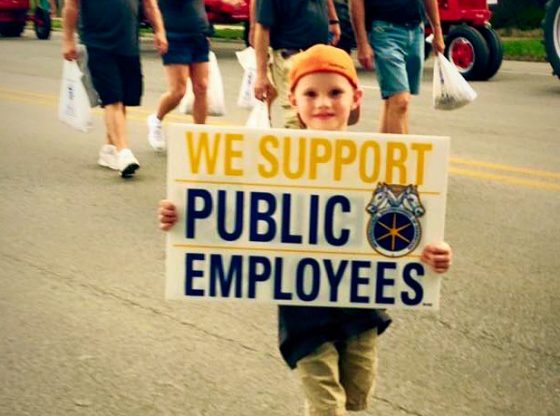 Supreme Court to Weigh Whether Workers Can Refuse Fair Share

Throughout our country, actions are underway with the goal of threatening public sector unions. Wealthy individuals and organizations, who have long opposed unions, are advancing a legal strategy to have the Supreme Court declare public employee fair share fees unconstitutional.

“If we don’t stand together, anti-union advocates will continue to encourage ‘free loaders’ who can take the benefts of belonging to a union, such as workplace representation, strong contracts, better healthcare and educational assistance, without having to pay for them.”  -Tony Barr, President of Local 916

Recently, Illinois Governor Bruce Rauner has been seeking to cancel all “fair share” payments in Illinois. Governor Rauner brought his challenge to federal district court arguing that fair share fees in Illinois were unconstitutional. The Governor lost because he lacked standing to sue but before dismissal, the district court allowed two state employees, AFSCME member Mark Janus and Teamster member Brian Trygg, to intervene and carry the challenge forward. Fortunately, Local 916 was able to success fully argue that Trygg’s claims were barred from recovery based on prior litigation. Unfortunately, Janus was able to appeal to the Supreme Court. The Janus case is expected to be heard later this year. By supporting plaintiffs like Janus, and anti-union organizations like the Right-to-Work Coalition, wealthy donors like Governor Rauner can use the judicial system to infringe upon collective bargaining rights. “Wealthy individuals and organizations, who have long opposed unions, are advancing a legal strategy to have the Supreme Court declare public employee fair share fees unconstitutional,” said Local 916 President Tony Barr. “The true goal of this lawsuit is to weaken unions by rolling back 40 years of legal precedent,” said President Barr. As members of a union, it’s important to know what “fair share” fees are. In summary,employees in the public sector, while not required to become a union member, are required to pay a union service charge or “fair share” fee. The basis for this fee is so that all workers who benefit from a collective bargaining agreement (wages, benefits, protections against unjust firings, etc.) pay their share of the costs of negotiating and protecting those benefits. It is no secret that if the Supreme Court invalidates “fair share” fees, it will have a significant impact on public sector wages and make it difficult for unions to provide effective representation to their public employees at the state and local government levels. The result of allowing “free loaders” will severely limit the payment of dues and fees that allow the union to do its job representing workers in both the public and private sector. If unions can no longer afford to have staff and resources to litigate unfair labor practices, grievances, and discriminatory actions by employers they will cease to exist. According to the Economic Policy Institute, and various other studies, if the Supreme Court funds fair share fees unconstitutional, it will not only impair collective bargaining rights, but also reduce public employee compensation Local 916 is fortunate that it has a low rate of non-members. “We believe the non-member rate is the result of the Local’s ability to negotiate fair contracts and represent our members effectively,” said J.P. Fyans, Local 916 Legal Counsel. Most recently, Local 916 has been able to negotiate free, high quality healthcare; a substantial educational tuition reimbursement program, all while maintaining paid time-off and regular work hours. Furthermore, Local 916 retains the resources to fight unjust treatment and wrongful termination in the work- place because it maintains the support of its members. “It is more important than ever for us all to stand together and protect our freedom to join together in a union, because by standing together we can achieve a better future,” said President Barr. “If we don’t stand together,anti-union advocates will continue to encourage ‘free loaders’ who can take the benefts of belonging to a union; such as workplace representation, strong contracts, better healthcare and educational assistance, without having to pay for them,” said Barr. Teamsters Local 916 proudly represents over 4,000 hardworking men and women throughout the State of Illinois in the private and public sectors.
U.S. Court of Appeals Preserves Fair Share Fees, Dismisses Right-to-Work Case
The Teamsters Care About Your Future and Your Family’s Future